Exhbitions / Places That Were Not

Ori Gersht / Places That Were Not 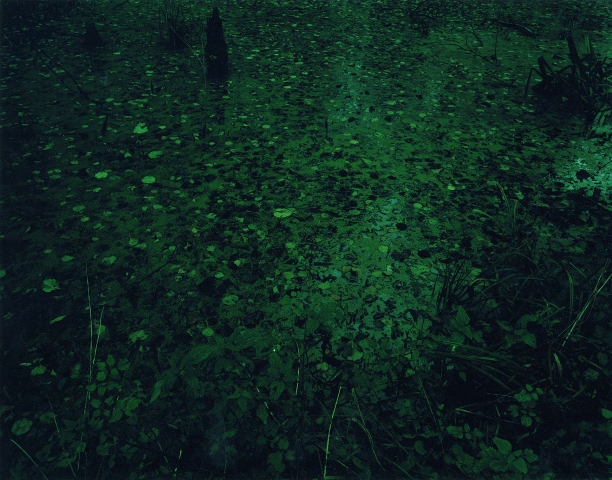 The artist is showing photographs from two bodies of work made in 2008 and 2009, Hide and Seek and Evaders.

As in previous series, Gersht’s depictions of landscape address ideas about memory, history and identity. They are images of places or journeys that are simultaneously physical and metaphysical, partly real and partly mythological. Photography’s claim to truth is questioned and rather than being presented with the depiction of a specific moment in time, the viewer is left instead with images that are suggestive of something that happened in the past, or might happen in the future.

The photographs in the series Hide and Seek depict hidden swamps and marshes located in the remnants, on the borders of Poland and Belarus, of the vast primeval forests that once covered most of Europe.

Gersht was seeking locations that at times of political conflict, during the Second World War, had become places of refuge for partisan communities.

Hide and Seek attempts to explore the dialectic between metaphysical and real places. Photography can only depict the reality that is physically present in front of the lens, and Gersht was interested in finding places to photograph that do not, or did not exist on the map and that therefore may be referred to as ‘nonplaces’ or voids. In doing so he attempted to take the photographs out side of the physical confinements of a place or a time and to relocate them in a subjective psychological space. This journey in search of the remote and historical hides was realized in a series of images that attempt to depict absence.

In these large-scale panoramas the horizon line is often dissolved and the special perspective is compressed, this visual approach enabled Gersht to unify the spaces and blur the distinction between reality and its reflection causing the images to liquefy and reappear like a mirage out of fragile stained colours.

In conjunction Gersht also took photographs in the vicinity of Sobibor forest where the sobibor death camp once sited and quickly replace by trees, whose routes thrived on the ashes below the surface. The photographs were taken through net curtains that traditionally are used by the local villagers to delineate public and private space. In doing so Gersht diminished the perspective and created the illusion of the lace and the landscape melting into one another while disguising and revealing each other.

The long panoramic images in Evaders were photographed in the Pyrenees along the Lister Route, on the border between France and Spain. This route is symbolic as a place of transition, suspended between past and future. It has a long history of smuggling, economically motivated migration and the search for refuge from political or religious persecution. During World War II many used this route to escape Nazi occupied France. One of these was the critic and philosopher Walter Benjamin, who committed suicide after he found the border closed on the day he attempted to cross it in September 1940. Benjamin’s failed escape has become tagged with a prophetic forecast of the impending cataclysm in Europe.

The clear visual references to German Romanticism in Gersht’s photographs, particularly to the paintings of Caspar David Friedrich, are suggestive of a fatal attachment to German culture that prevented Benjamin, like many others, from grasping the horrific scope of the Nazi agenda until it was too late to escape its consequences. Since the introduction of the Single European Act, the physical borders are no longer there, but Gersht’s work raises questions about the continued existence of cultural and psychological borders.

Ori Gersht was born in Tel Aviv in 1967 and studied at the Royal College of Art in London. He has exhibited internationally since 1999, including solo exhibitions at the Art Now room at Tate Britain (2002) the Tel Aviv Museum (2002), The Photographers’ Gallery, London (2005/06,) the Yale Center for British Art, New Haven (2008) and in the Black Box at the Hirshhorn Museum Washington (2009). He lives and works in London